It happens to me almost daily – I am amazed at the insanity in our world which is under the ever-so-strong influence of the Evil One.  The evidence of his trickery and deception is all around me.  Our world’s values are a testament to the Father of Lies. 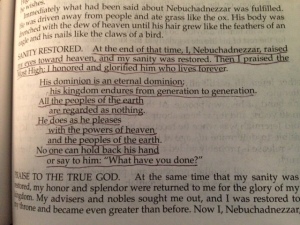 Most recently I was surprised by the realization that I know grown, adult people who actually believe that things they do aren’t wrong unless they get caught.  It only becomes a bad decision for them when other people know.  Up to that point, it’s all okay.

When I’m confronted by such obvious lies like that, I am filled with sadness for all the people who live their lives based on these deceptions.  They are confused and angry………and broken and lost.  They are consumed by their need to blame others.

So I come back to God’s word and I feel like King Nebuchadnezzar when he raised his eyes toward heaven and his sanity was restored.

I praise you, oh Most High.  I honor and glorify you who lives forever.

You are eternal.  Your kingdom endures from generation to generation, never-changing, never wavering.

Get in the Picture