The Sea of Galilee is a very beautiful sea. 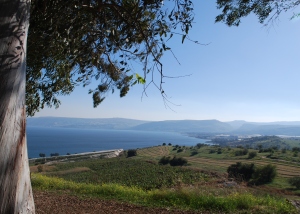 It’s really not that big.

I had the privilege of spending a day there 2 years ago.   It was tranquil and calm – until the wind picked up.  In the New Testament, we read of several storms rolling in over this sea and I experienced how quickly our boat went from perfectly still to  significantly rocking.  I can imagine how fast those storms could grow and become threatening.

So how could Jesus walk on it?  That’s impossible!

Nothing that we know or can understand explains this. 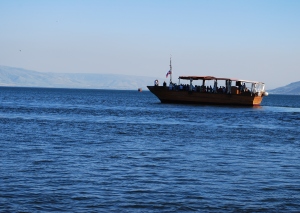 But its water that was brought out of nothing by the Creator of the Universe.

And this water obeys his commands.  It’s not the same as when you and I obey.  We are created in God’s image so we have a brain.  We have to think, to decide, to act.

The water just responds to its Creator.

I’m pretty confident if some of today’s geniuses of science could have been studying the water that Jesus walked on, they would have witnessed the molecular structure of the water change for just a few seconds as Jesus’ foot touched it.  Science would be able to tell us what happened but it would never have been able to explain why it happened.  It would be labeled an unusual phenomenon.

But we know who did it.

God created science.  And he can use it freely whenever he wants.

It wasn’t ‘just water’ when it was in God’s hands.

The same is true of you and me.  We’re not ‘just’ men, women, young adults, teenagers or children when we’re in God’s hands.

Something supernatural is going on when we trust in God, because his spirit comes to live inside of us…

and we become phenomenal!

I Changed My Mind