I’ve been there more than once – have you?

It’s the times where I wish I had a second chance – a redo.  When my heart is aching with regret and my head is rolling with things I shouldn’t have said or things I should have done but didn’t do, I wish I could go back.

If I had the chance to do it over, I would do it so differently!

With people, there is never a 100% redo.  The deeds are done, the words have been said.  Forgiveness is possible but wiping out the memory is not.

One of my favorite things about God is that he can redeem these situations.   He can and he does make something good come out of them.  He teaches me to grow through these times – helping me mature as he molds my character and thinking.  When I ask for wisdom, he always gives it to me which helps me avoid situations where I need redo’s.

As I read about Rahab in Joshua 2, I can visualize this huge headline on it –

Rahab was a prostitute in Jericho when she met the two spies Joshua had sent into the city to check it out before the Israelites attacked.  Rahab made the courageous decision to put her life on the line for the spies when she hid them from the men the King sent to kill them.  She lied to the king’s men telling them the spies had gone out of the city so the kings men quickly went in pursuit just as the city gates closed for the night.

Meanwhile, the spies were safely hidden on the roof of Rahab’s house.  Rahab knew the Israelites were going to attack – everyone knew it and were very afraid.   When she begged the spies to save her family, they agreed because of her courage in hiding them.  Then Rahab helped them escape out of the city and sent them on a different direction from the men who were looking for them.

Later, we will read that Rahab and her family were the only survivors of the attack on Jericho.

It’s obvious that God saved Rahab for a purpose.  He had bigger plans for her.  After God saved her, she totally changed her direction, married, had children and became part of the lineage of Christ.  A prostitute was the great, great, too many greats to count,  grandmother of Jesus, God’s son, who came to save the world.

God is extremely serious about his redemption business.

Rahab’s story was obviously shared down through the generations as a popular redemption story because she shows up in the New Testament, “was not even Rahab the prostitute considered righteous when she gave lodging to the spies and sent them off in a different direction.”  James 2:25. 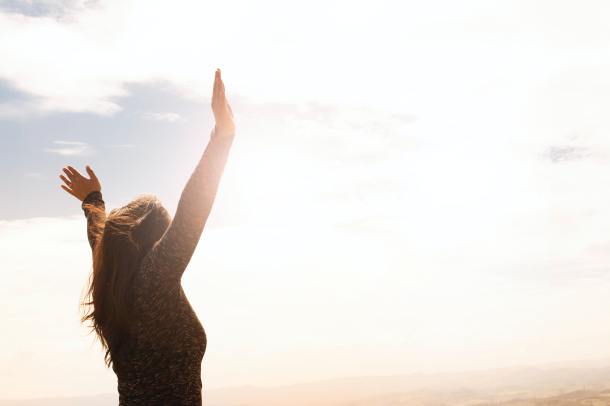 Today I live in grace provided by Jesus, unconditionally loved by my heavenly Father.   I am free.

None of us want to hear these words.  Yet this is what God says to us through Jeremiah who was talking to the Israelites who were in exile –

“Your wound is incurable.  Your injury is beyond healing.  There is no one to plead your cause, no remedy for your sore, no healing for you.”

There was no hope for them.

I am very glad to say the same is NOT true for us.  Between then and now, Jesus was born, lived a perfect life and then offered himself up as a sacrifice on the cross.  Jesus cured our incurable case of sin and rebellion.  He paid the price for all of our sins for all time.

After Jesus was buried, he rose from the grave through his own power.  And now he sits in heaven next to my Father God.

I have accepted Jesus’ free gift of salvation so God no longer sees my sin.  Jesus’ sacrifice covered it.  What does God see when he looks at me?  He sees the daughter he loves with a perfect love.

If you haven’t accepted the free gift of salvation which Jesus offers to everyone, you have an incurable wound of sin which is beyond healing.  There’s no remedy…..

Accept the salvation offered through Jesus today, be healed and become a child of the King.  There is no better time that right now.

Thank you, Jesus, my Savior and Redeemer.

They tried to find something to charge Daniel with but they couldn’t do it.  They found him to be trustworthy, without corruption or negligence. 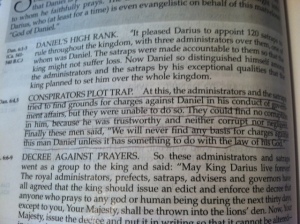 This reminds me of the prayer Jesus prayed for us.  In the garden, he prayed for ‘those who would believe’ because of the disciple’s obedience in spreading the Good news.  That’s us! He prayed that we would live in unity with him and with each other.

Jesus prayed that the world would look at us and then be able to believe in him.  He knew we weren’t going to be perfect.  But he also knew that, after his sacrifice on the cross, we were going to be redeemed.

And there should be obvious proof of that redemption in our lives.

We have been forgiven and now we can forgive others.

Our Father God lavishes his love on us and now we can love others.

We have been richly blessed and now we can bless others.

Yes, we are redeemed!

And the people around us should be able to tell it because we forgive, we bless and we love.

When the Answer is No

The Moment I Knew