What are we thinking?

As I read the account of Gideon in the book of Judges, I wonder what he was thinking when he threw out a fleece so God could assure him that he was going to save Israel though Gideon. 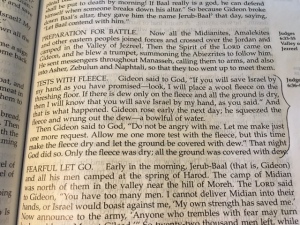 Gideon had already talked with the Angel of the Lord who gave him a sign by burning up Gideon’s offering with the tip of his staff.

When Gideon obeyed God’s command to tear down the Baal altar and Asherah pole, God showed that he was with him by protecting him from the hostile crowd.

After that, the Spirit of the Lord came onto Gideon which was special, unusual at that time – a clear sign that God was with him.

And – still – Gideon had to throw out fleeces to make sure God meant what he said.

We see a clear picture of God’s mercy and patience with Gideon – and with us – in this story.  God did not send down a lightening bolt to kill Gideon even though Gideon’s faith was so shaky that he had to keep testing God.

God didn’t give up on Gideon and go find someone else who would understand that a visit from the Angel of the Lord should be enough.

God patiently passed the fleece tests 🙂 so that Gideon could actually believe that God was going to do what he said he would do.

God is so patient with us!  He knows we are weak and he loves us anyway.

One of our goals on this Journey towards the Truth is to grow our trust and faith in God.  As we get to know and understand God at a deeper level, we should be able to obey him without having to throw out fleeces.  His directions and desires should become more and more clear to us the closer we get to him.

That’s the journey that we’re on.

Thank you for your guidance, Abba Father.