That was not my intention.

It’s not a big deal.

These are all things we tell ourselves when we realize we have done something wrong but we don’t really want to acknowledge it.  We often rationalize it away – never owning up to it.

We don’t admit our mistakes.

People get hurt, we don’t trust each other and we struggle with our relationships.

One of the reasons King David was ‘a man after God’s own heart’ was because he was good at admitting it when he did something wrong.  He was a little blind to how badly he had acted with Bathsheba until Nathan pointed it out to him.  We all need great friends who will lovingly point it out when we mess up.  As soon as David’s eyes were opened to his mistakes, he admitted them and repented.

That’s what God wants me to do when I’ve made a mistake  – own it and try not to do it again. (confess and repent).  God knows my heart so throwing “I’m sorry” around without meaning it doesn’t work.  God can see whether I’m sincere in my apology and serious about not doing whatever it is again. 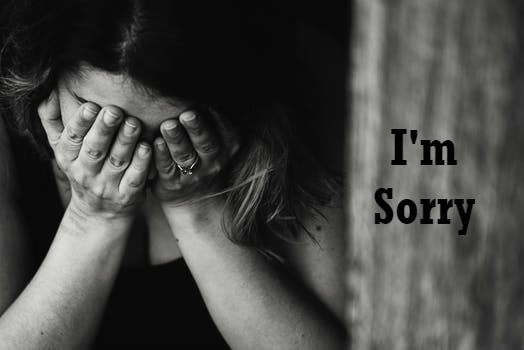 God wants you to admit your mistakes and repent, too.

Let’s not rationalize it away.

Let’s not say it’s ok – nobody is perfect.

Let’s not ignore it.

God wants us to have trusting, lasting relationships and dealing well with our mistakes is a big part of that.

Please help us to be quick to confess and repent, Abba Father.