It’s hard for me to be still and watch.  I’m a doer.  I’m an achiever.  I spent over 34 years of my career “making things happen”.

So I like to skim over all the situations in the Bible where God tells us to “be still and watch”.  And God says this often.  You probably don’t notice how often he says this unless you’re trying to ignore him when he says this – like me.

In 2 Chronicles, King Jehoshaphat tells his people not to be discouraged by the huge, combined army that is marching toward them. “You will not even need to fight.  Take your positions; then stand still and watch the LORD’s victory.”

After saying this, the king and all the people bowed before God with their faces to the ground and they worshipped God.

This creates a great visual picture in my brain because they were acting like they had already won!

Early the next morning, they marched out to their positions singing praises to God.  They were not afraid – God was going to fight for them.

And he did.  The huge enemy army became confused and started fighting each other – killing everybody in their own army.

God’s people won without raising any weapon except their trust in God.  It took them three days to gather up all of the supplies and valuables left behind by the dead army.

Wow!  God is saying to me and you today that there are battles coming at us which he wants to fight for us.  We just need to trust and be still and watch. 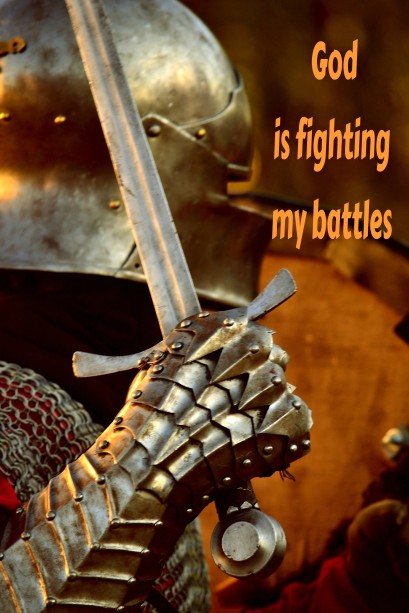 I have something in my life that I’ve been ‘battling with’ and God just reminded me yesterday that I need to give it to him. (I actually should have given it to him a while ago).  Today he is confirming that through his Word to me.

I’ve been trying to make it happen but it just hasn’t.  Frustrating!  So now I’m going to be still and watch.  I know I don’t really want it to happen unless God also wants it to happen anyway, so I like this plan.  Everytime I think about it, I’m going to send it up to God in a prayer, “Do your will, Father.”

I trust that he wants the best for me so I will be still and watch.

Thank you for reminding me and confirming this for me, Abba Father.