We are never alone.

God is with us. 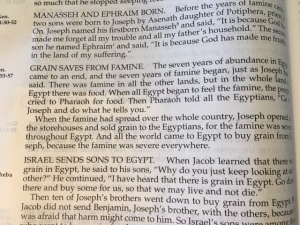 Just like he was with Joseph thousands of years ago.

God was in the  dark pit with Joseph where Joseph’s brothers left him to die.

He was in Potiphar’s house as Joseph ran away from the advances of Potiphar’s wife.

He was in jail where he helped Joseph interpret dreams that eventually freed him.

God helped Joseph as he ruled Egypt, second only to Pharoah.

As we read the historical account of Joseph, we see him walking with God, year after year.  We watch him become more mature, become more wise.

The Joseph who devised a plan which saved his family and all of Egypt from starving was not the same Joseph who irrationally told his older brothers they would bow down to him someday.

Joseph had walked with God and he had grown up.  Joseph had let God change him into a wise, strong, faithful and forgiving man.

As a result, Joseph conquered significant adversity in his life and he had a huge positive influence on a multitude of people around him.

Joseph made the fact that God was with him count for something.  He let God transform him into a man who would save the lives of a whole nation.

God wants to do this same thing in our lives.  He wants to mold us into the people he created us to be.

Please open our eyes and hearts to your transforming power, Abba Father.

When the Answer is No

The Moment I Knew