Has this happened to you?  I’m in a crowded place where many people are talking and then one lone voice clearly sticks out of the noise.

I know that voice.

It’s somebody I know and I instantly recognize it and turn toward it.  In the past this voice has often been one of my children or my husband or a close friend.

That is also how it is for me with God’s voice.  His voice pierces through all the other voices around me.  Because I know him.

Little Samuel was just getting to know God in 1 Samuel so when he heard a voice in the middle of the night, he thought it was Eli, the High Priest.  So Samuel would run to Eli every time he heard this voice and Eli would tell him he didn’t call him.  The third time this happened, Eli realized that God was calling to the little boy.  Eli had heard God’s voice often so he told the little boy what to say, “Speak, LORD, for your servant is listening.”

After that, God became Samuel’s constant companion as he grew up.

Have you heard God’s voice?

In my life, the more I study God’s Word and know what he says, the easier it has become to hear him.  I have heard him teach me and reveal truth to me for many years as I have read and studied the Bible.  I know his voice.

I have also been seriously memorizing chapters in the Bible for several years so I have God’s Word etched on my brain.  When he wants to give me direction and wisdom, he will highlight some of the verses I have written in my mind and speak to me through those verses.  There is no doubt who is speaking to me when he’s speaking God’s word.  And I know it’s the truth, not some whispered lies of Satan. 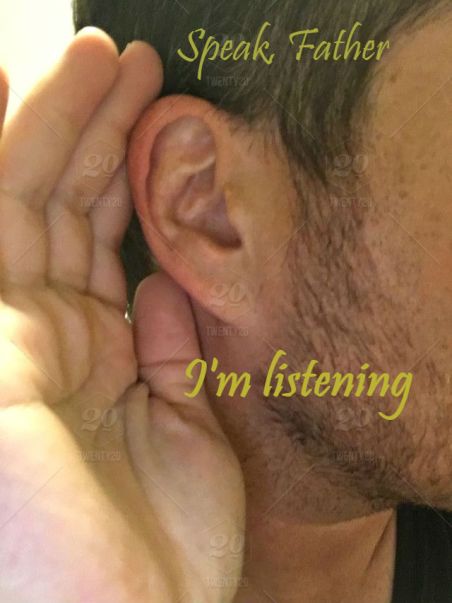 There are occasions when a person is speaking to me about something in the Bible and God will say in my head, “You know that’s not true.  You have read my Word and you know this is not what I have said.”  Sometimes God will give me an opportunity to ask where this person has read this in Bible so we can discuss it and sometimes I don’t get a chance to ask.  Either way,  God is helping me keep in line with his truth.

There are situations where God does the exact opposite.  Someone I’m talking with will share a new understanding or experience they had with God and it will immediately ring true in my brain – that’s  God!  And then I get to celebrate with this person because they are getting to know God better and they will continue to have more and more of these experiences when they stay on this path.

A critical part of creating this open communication with God is what happens after he talks to me.  I need to obey.  If I don’t listen and obey, I will not hear God as clearly next time.  Just like Samuel, I need to say, “Speak, LORD, for your servant is listening.”  And then I need to do what God says – that’s how it works.

God’s voice is the most important voice in my life.

I know his voice.

Get in the Picture