I have a couple of favorite support team members from the Bible whose actions and loyalty resonate with me.  If I lived at that time, these are the people I would want to be like.

Caleb is one of these people.  Everytime we read about him in the Bible, he is being faithful to God and supportive of Joshua who had the lead role at this time.

Caleb was one of the spies God sent into the Promised Land and, when the people were afraid to go because of the other spies’ report, Caleb joined Joshua in pleading with them to go ahead and claim the land.  “The Lord is with us.  Do not be afraid of them.” (Numbers 14: 10)

Unfortunately, the people listened to the other 10 spies which made God very angry and resulted in 40 years of wandering around in the desert so that their generation could die off.  They had walked through dry land in the middle of the Red Sea, they saw the Egyptians defeated, they ate quail and manna every day in the middle of the desert but they still didn’t trust God.  As a result, the older generation never got to see the Promised Land.

The 10 spies died right away from a plague. 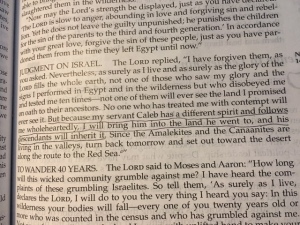 After the 40 years of wandering, Joshua would lead the way into the Promised Land with his faithful supporter, Caleb, at his side.  They would be the only ones from their generation and older to see God’s promise fulfilled because they had believed God would do what he said and they were willing to stake their lives on it.

God commended Caleb by saying, “he follows me whole heartedly.” (vs 24).

Most of us aren’t given the lead role in our faith communities.  We are the supporting team.  The encouragers.  Standing strong and faithful next to those who are called to lead.